Hopefully, you want your kids to be resilient. Anytime they’re met with an obstacle, you want them to be willing to try again a new way, rather than just give up on their goal.

The best way to promote resilience and “grit” is something called a growth mindset.

So what is a growth mindset, and how to we give it to our kids?

More to the point, what do we often do that squashes our child’s love of experimenting and learning, and how can we avoid these behaviors? Learn more about promoting a growth mindset in your kids in this post!

What is a growth mindset?

When you have to learn something new and difficult, you are likely to have one of two automatic reactions.

The first: This is too frickin hard! Screw it, I’m not able to learn math.

A lot of us struggle with this attitude. And it limits us.

We assume that we have a limited capacity to learn, whether it’s related to something academic or a more hands-on skill (anything from knitting to doing yoga to golfing).

The second possibility is a much better reaction. What if you instead thought, Hey, next time I swing the golf club, I’m going to follow through with my stroke. You give yourself the chance for incremental improvement on a skill, and you get much less frustrated.

THIS is a growth mindset, and it’s what you want to pass to your kids! But how do we do that?

1. Allow independent play for your kids

As much as possible, make your home an environment where your kids can play without lots of stuff that they can’t touch. Put up the fragile knick-knacks and child-proof as much as you can.

Not only is it exhausting to keep your kids from touching “no-nos” all the time, but it actually limits their creativity in the long run.

Looking for open-ended activities for your kids to do that requires little set-up and clean-up from you but gets your kids playing for a long time? Check out Little Effort, Lots of Fun: Bonkers Easy Activities for Kids! This list of 20 activities includes pictures, (easy) supply lists, and set-up instructions for each activity!

And allowing your kids to freely play outside often is even more important for a growth mindset!

Whether they’re at a playground or out in the yard, there’s always multiple ways to accomplish a task.

Have you ever watched two children trying to throw a ball up into a fort? When they fail, they’ll talk to each other and try to come up with another strategy. This thinking and planning is great for them!

Finding new ways to climb a play structure, using their arms different ways to throw a ball, even examining flowers and insects: These are all examples of open-ended play. Independent play like this allows your kids to think for themselves, and all of these simple activities promote a growth mindset.

Most skills will require mistakes for kids (and adults) to master them. The trick is to remember that it’s okay!

For example, a few years ago, the girls went to a pumpkin patch. They each got a little pumpkin and a sticker set to make a face on their pumpkin. So we let them work them when they got home. Here are the results:

Could I have guided the girls into making “better” faces on their pumpkins? Easily! But other than satisfying my own aesthetic sense, what purpose would that serve?

Perhaps we think, “But they have to know the right way to do it!” One day, yes.

But ask yourself, “Is this something they’ll eventually figure out on their own?” The answer is almost always yes. 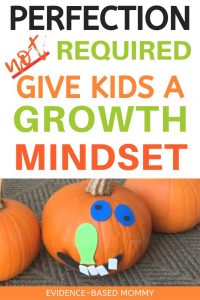 And we’ve all had times even as adults, maybe especially as adults, where we’ve fallen short of our goal. That’s why we love Pinterest Fails, they make us feel better about ourselves!

So think about your latest “Pinterest fail,” whether it’s a craft, a hairstyle, your attempt at winged eyeliner, or even a big project at work. Whatever it is, think back to something that you knew was not as good as what you imagined in your head.

Pretend that after you completed your project, someone came up and told you, “You know, you didn’t do that right.  It’s supposed to look exactly like this picture.” What would your reaction be?

I’d be irate! I could just hear myself exclaiming, “I know it’s supposed to look like that! I tried and just screwed it up. You do it better then, buddy!”

Your kid probably has an “ideal” in his head for whatever she was making too. And let’s be real, the thing she made likely isn’t up to the standard in her head either.

So when we come and “fix” it for her, either by moving the stickers to the “right” place or whatever the situation is, it’s probably demoralizing. Do you think he’ll be as excited to try a similar project the next time?

That’s why when I give my kids these activities to do, I just let them go wild and don’t try to direct them much. Plus, everything is easier for me that way too!

3. Allow your kids to be wrong sometimes

Kids have fantastic creativity.  They’ll come up with their own reasons for why the world is the way it is, and it’s fascinating to listen to them think.

Sometimes, their reasoning is missing a few pieces of the puzzle, and they’ll come to the wrong conclusion (you know, like adults do). My knee-jerk reaction is to want to correct my child. 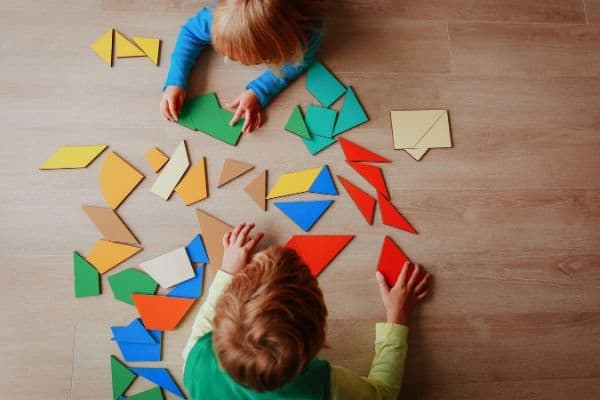 But I try to resist! Does it really matter if your three-year olds thinks cats are just baby lions? No. They’ll go to school one day and be faced with reality, and they’ll come home all excited to tell you how lions are related to house cats but different.

Believe it or not, knowing all the answers isn’t the best thing for your child! Read on to find out why.

In one of my favorite scenes of How I Met Your Mother, older Ted opens by talking about how smart phones have ruined conversation. It shows a time, probably in the early 00’s, when the gang is arguing over what the most popular food in America is. Pizza, hamburgers, hotdogs: they’re all passionately defended, as well as pancakes with maple syrup by the resident Canadian.

Fast forward to 2011, when someone brings up the same question, phone in hand:

“Hey, remember when we were arguing about the most popular food?”

Everyone says, “Ah…” in a bored manner, and the debate is killed.

So how does this relate to a growth mindset?

What do you do when your child asks a question?

I know, I love the magic of Google, where you can almost instantly find the answer to any question.  And it’s gratifying to find out the answer. 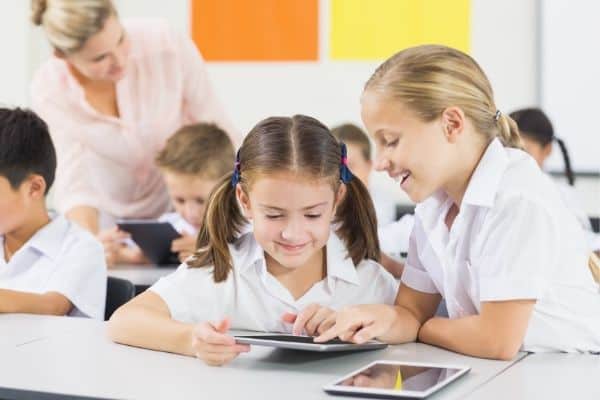 In fact, we get a spike of dopamine whenever we find something we were looking for, whether it’s a tasty snack, or in this case, the answer to our research (incidentally, this is much of why you can get so hooked to your phone!).

RELATED: The effects of screen time on your kids’ brain (and how to avoid them!)

But, just like Ted, Marshall, and Robin arguing at the bar and thereby being deeply engaged with one another, there is immense value in letting your child try something on their own, even if it’s wrong.

Letting your child think through his own questions gives him the chance to improve his own critical thinking skills. That doesn’t mean you give no input, it just means you don’t automatically answer a question.

For example, maybe your little one wonders why the sky is blue. You have a few options.

There’s always the irritated, “I don’t know! Leave me alone.” But of course that’s not the best way.

You could bust out the phone, do a quick search, and then respond, “Well, this Scientific American article says it’s because blue light is scattered more than red light, leading it to have a higher intensity reaching our eyes (btw, I don’t know about you, but I’ve learned something today!).”

But how about this: Try instead saying, “Gosh, I don’t know!  What do you think?” and just see what he comes put with.

This concept even applies to babies who aren’t speaking yet. I have fond memories of little General Leia playing with a shape sorter. For months, she struggled to use it.

I thought about picking up a shape and putting it into the bucket to show her how it worked, but I thought it would be more valuable for her to figure it out herself. And her persistence (and my patience!) paid off!

And even though it took little Leia a long time to get that one “circle in the circle hole” at first, the struggle was helpful for her.  Studies with mice show that their brains actually change and grow through trial-and-error learning.

The same is true for us! This is why active learning, especially for children, is preferred over sitting in a desk and listening to someone teach. Giving kids fun activities without worrying about a learning objective is often the best way to help them learn.

6. Model accepting your own mistakes

This is a big lesson I’ve really only started working for myself over the past few years. I used to not be able to braid my own hair at all.  My arms would get tired, I’d drop pieces, and it would generally look like a mess (and not in a cute way).

I just assumed I was just “bad at braiding” and envied people who were “good at it.” Whenever I did try, I’d end up in a bad mood because I wan’t good enough for my own standard.

But eventually I learned how to stop getting so angry at my lack of perfection. After all, the worst that could happen is I give up, stick my hair in a bun, and move on.

And after a few months, I started getting better at braiding! That doesn’t mean that my braids always look like I plan, but I’m able to approach each attempt as a learning experience with low stakes.

And if your kids see you accepting your own shortfalls, even better.

Conclusions on promoting a growth mindset in kids

I hope these tips have helped! To summarize:

Thinking through these ideas can lead you to remember that your kids are still little, and they have lots to learn. And you know what?

You still have lots to learn too, and that’s okay!

And in case you need ideas for building your children’s resilience, Little Effort, Lots of Fun: Bonkers Easy Activities for Kids are a great way to let kids practice open-ended play and learn new skills. Check them out!

152shares
Samantha Radford has a PhD in Chemistry from Emory University (Atlanta, GA). She is an exposure scientist who focuses on maternal-child health. Samantha has years of research into learning about how chemical exposures affect both unborn babies and children, as well as how toxicants and medications are passed through breastmilk. Samantha also studies the effect of exposure to hormones induced by personal experiences, for example, cortisol in babies who are stressed or oxytocin in mothers bonding to their infants. Through the years, Samantha has expanded her academic and personal studies to how exposures to different parenting styles affect the mental and physical health of children as they grow to adulthood.

2 Comments on 6 ways to build resilience in your kids