It’s so hard to teach kids to share or take turns. In any household with more than one child, conversations much like this are heard almost every day:

And so on, causing parents to want to tear their hair out.

Eventually, we snap. “Okay, you’ve had it long enough!  Give the toy to your brother now!  You have to learn to share.”

And it only makes sense that you lose it when you hear your kids arguing. After all, there’s only so much whining you can take. On top of that, you’re probably trying to fix dinner, check backpacks, and peel the one-year old from around your leg, all at the same time that this is all going on.

But you know that yelling when you’re frustrated with your kids isn’t the way you want to parent.

RELATED: Stop yelling and be a calmer mom

Are you tired of having no good solutions when your kids just aren’t listening? Sign up for the Mindful Mamas and Connected Kids toolkit!

You’ll get eight pages of strategies you can implement immediately, including printable Mama Mantras (to place around the house!), the six step Tantrum Tamer process, and Playful Prompts for Cooperative Kids. Join here to get your toolkit today!

But what if there was a better way? Keep reading to learn how turn-taking is an improvement over sharing!

How traditional sharing isn’t good for either kid

Think back to the last time there was a toy argument in your house (you know, about five seconds ago). When you make our kids share, what measure did you use to determine that one child had the toy “long enough?”

One popular option is to use a timer. Usually, one child will be told she gets a toy for five minutes, and when that time is up, the next child gets the toy. But there’s a few problems with that.

For one thing, young kids really have no concept of time. So they really don’t understand how long they have.

For another thing, it could be really stressful to know you only have a limited time to play with a toy! I could see how such a limitation looming over you could really take away the enjoyment.

NOTE: If children have been introduced to using a timer before, it might work for them if they both agree to it. Just make sure both kids like this solution before setting it up.

When parents decide whose turn it is with a toy

Alternatively, you might just take over deciding who gets a toy more arbitrarily.

For example, you might reason that your older child needs to “be nice” to the younger one and should give up a toy just because he asks.

But think about if you were the older sibling. Wouldn’t that make you feel really resentful of your brother?

The same thing goes if you make one sibling give up a toy just because you want the other to stop whining. That just teaches one child to resent the other, and it teaches the whiner to keep using that strategy!

What if, instead modeling the old adage that “the squeaky wheel gets the oil,” we leveraged arguments over toys to encourage patience and empathy for everyone involved? 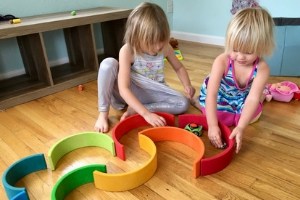 The benefits of turn taking

With taking turns, Kid B has to wait until Kid A is finished with the toy to get it. But here’s the trick: Kid A has to decide on his own when to give the toy up, and Kid B has to simply wait.

Think about the benefits: Kid B learns patience, including the valuable lesson that “not yet” is not the same as “no.” 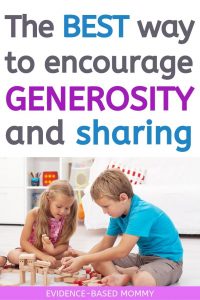 Kid A gets to feel good about giving her sibling something he wants. This self-motivated generosity is much more valuable than the forced version, which actually promotes greed.

How difficult is it to get kids to take turns?

When you first implement turn-taking, it might be a rough process. This is especially true if your kids are used to whining until you break down and step in.  There will probably be a lot of pushback at first!

But with a bit of time and practice, your kids will get better. It’s definitely worth starting the habit!

A typical exchange with turn-taking

Even though we’ve been using turn-taking as long as my girls have been old enough to fight over toys, I still often have to coach them through the process.

Leia (in whiniest voice possible):  Moooom, Bella Bean won’t give me the caaaaarrrr…

Me:  Have you asked her for a turn yet?

Leia, turning to B. Bean:  Bella Bean, can I have a turn when you’re all done?

Bella Bean typically hands car to General Leia within like 45 seconds.  Leia thanks B. Bean and life thankfully moves on.

Sometimes, when one girl is really engrossed in play with an object, the answer will be “When I’m done,” which I’m totally cool with.  Sometimes the other kid is also cool with that, and sometimes not.

My older one sometimes turns to me and dramatically says, “She’s gonna play with the car forever.  I’m never going to get a turn!”

In these cases, showing empathy can be really helpful.

My typical response is short and simple.  “Oh baby.  It’s hard to wait, isn’t it?”  Usually, the child will agree with me, and feel at least a bit placated knowing I recognized her emotions.

Validating my child’s feelings often gives her the patience to wait a bit longer, or at least find something else to play with.

When Bella Bean was smaller, “May I have a turn when you’re done?” was simply too big a mouthful for her.  She would just snap and scream in frustration instead.

But there’s a simpler phrase for younger toddlers! I figured out that jumping in with a quick, “Say ‘turn, please!'” helped keep things from getting to the breaking point.

If your child is younger and having a very hard time with turn taking, tell him something like, “I’ll stay here and help you wait for your turn! Let’s play with this truck until your sister is done.”

That little bit of guidance can make a big difference. And in fact, the little one may get so engrossed with the truck that he forgets all about the other toy.

When coaching is needed for successful turn-taking

Occasionally, I get the sense that one kid hanging onto the toy isn’t so much about being engrossed in play, it’s more of a power trip. That goes something like this:

Leia (in whiniest voice possible):  Moooom, Bella Bean won’t give me the caaaaarrrr…

Me:  Oh no, you seem sad about that.  Have you told her how you feel?

Leia, back to B. Bean, with a few sniffles: Bella Bean, I feel sad that you won’t give me a turn.

When these conversations work out, they’re my favorite ones to hear. One or both children get to practice expressing emotions, which is such an important skill!

Typically, within a minute or two of an exchange like this, one child will turn the toy over to the other.  This is generally followed with a genuine expression of gratitude and a genuine response of “You’re welcome.”

Should you force turn-taking?

Let’s be clear: I do NOT expect one child to do for another just because the one expresses painful feelings.  I have explicitly told them that they don’t owe anyone anything just because that person is sad or mad, and as they get older, I will continue teaching this lesson in more specific situations.

RELATED: 5 steps to setting boundaries (even when you weren’t raised to)

One of the most valuable (and perhaps most difficult) skills that we can instill in our children is an ability to empathetically but firmly tell others no, even in the face of those others’ strong emotions.

However, I also want my children to be aware that their actions can affect others.  So once one child tells the other that she’s sad, I don’t chime in with a guilt trip.  I just let the kids work it out themselves (but listening in case further coaching is needed).

Do kids learn to take turns or share on their own?

As time has gone on, I’ve had to prompt my kids less and less to take turns. Although I still remind them to ask each other for turns on a fairly regular basis, more and more often, they figure it out on their own.

After a year of using the turn-taking method, I regularly hear an unprompted, “Can I have a turn when you’re done?” responded to with an enthusiastic “yes.” 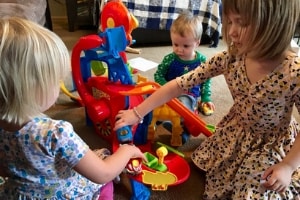 Why turn-taking is easier for parents too

Another bonus beyond the whole “teaching-your-kids-empathy” thing:  encouraging the turn taking method gives you a no-brainer script for pretty much every time kids fight over a toy.

Have you tried teaching your kids to take turns? How did it go? Let us know in the comments, and until next time, happy parenting!

148shares
Samantha Radford has a PhD in Chemistry from Emory University (Atlanta, GA). She is an exposure scientist who focuses on maternal-child health. Samantha has years of research into learning about how chemical exposures affect both unborn babies and children, as well as how toxicants and medications are passed through breastmilk. Samantha also studies the effect of exposure to hormones induced by personal experiences, for example, cortisol in babies who are stressed or oxytocin in mothers bonding to their infants. Through the years, Samantha has expanded her academic and personal studies to how exposures to different parenting styles affect the mental and physical health of children as they grow to adulthood.

3 Comments on Sharing or taking turns?Teach your kids to take turns