You know those days when your precious little cherub is just  driving you up the wall? When you feel like there’s nothing you can do to get her to listen? Maybe you can try play!

Yesterday was one of those days. I was at home with the three kids (five, three, and one and a half), and the oldest had gotten really whiny. She was wanting some screen time and it just wasn’t in the schedule.

RELATED: The effects of screen time on your kid’s brain (and how to avoid them!)

(Trust me, I would have loved for her to go play. But she didn’t want to play, really, she wanted to have some screen time. So I told her it’s not the right time right now.)

So she starts to whine. “I just can’t think of anything else to do.”

Getting irritated, I say, “You can either play or help me put up laundry.”

Ensue crying. “I don’t want to do either of those things.  I only want to play my game!”

And so it went on.  My patience was wearing super thin.

Are you tired of having no other solution but to yell when your kids just aren’t listening? Sign up for the Mindful Mamas and Connected Kids toolkit! You’ll get eight pages of strategies you can implement immediately, including printable Mama Mantras (to place around the house!), the six step Tantrum Tamer process, and Playful Prompts for Cooperative Kids. Join here to get your toolkit today!

It was just after Halloween, and both my little girls had chosen to be witches (they were adorable, by the way). Bella Bean, my three-year old, had put on her witch costume while all this whining was going down, and kept walking into the middle of the swath of folded laundry surrounding me as I was trying to get it all put away (also a pet peeve of mine).

How play can reconnect you to your kids

Suddenly, I had an idea to try to help everyone get it back together. I came up with a playful scenario and said to the girls:

“Oh no! I’ve turned into a pumpkin! What should we do?”

I’ll be honest, I didn’t use a lot of enthusiasm. I was still pretty annoyed at this point, so I probably sounded pretty deadpan.

But still, I turned to Bella Bean.  “What if the two of you made a witches’ brew to fix me?”

B. Bean was excited.  “Let’s make a witches’ brew!” she exclaimed to her sister.

At first, General Leia wasn’t having it.  “I don’t want to make a witches’ brew,” she said sullenly.  But Bella Bean started working on it anyways. Somehow, my younger daughter wasn’t making the pretend, invisible witches’ brew up to Leia’s specifications, so she jumped up to manage the project. “We need eyeballs and toenails and gross stuff!”

They “gave me” the brew to drink. I pretended to gulp it down, remarking on how gross it tasted. I was concerned that Leia hadn’t played long enough to hit her reset switch though, so I then said, “Oh no! Now I’ve turned into a watermelon!” 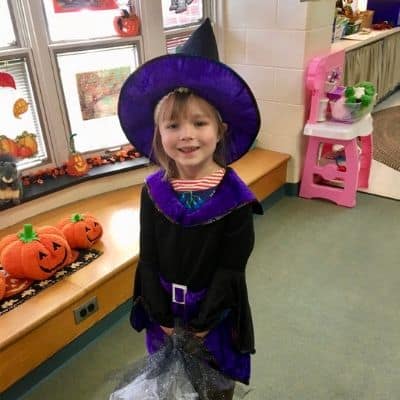 Both girls giggled. “Wait, we have to make another witches’ brew!” Leia exclaimed, and they were off. This went on for twenty or thirty minutes. The girls came up with ingredients for the brew, I “drank” it, and then came up with another thing I became. Sometimes Bella Bean would come up with my transformation instead.

Within that time frame, I was a bat, a banana, a lion, a robot, an eyeball, and who even knows what else.  We were all giggling, plus I was able to finish folding laundry! All I had to do was come up with a random animal or inanimate object to say I’d turned into every couple of minutes. And even after the game was done, Leia was in a better mood and Bella Bean was less clingy. They were engaged in playing with each other.

Was it the witches’ brew game that saved us? Not specifically. It was a sense of humor (even when I really didn’t feel particularly funny) and a willingness to be just a little playful that did it.

When else can you use play to gain cooperation?

There have been other times this tactic has helped us. Just the other day, I had asked my oldest to get dressed for school like twelve times (I’m pretty sure). I was trying to get some dishes done, so I wasn’t going to chase her down.

I was getting really irritated. It seemed like no matter what I did, whether I was nice or angry, she wouldn’t listen.

But I remembered a trick I’d just read about in Lawrence Cohen’s Playful Parenting. So in a not very playful voice, I said (half yelled?), “Pretend I’m the mommy and I’m getting really mad because you’re not getting dressed!” She said, “Okay!”

She raced off into her room, and (hooray!) came out a few minutes later ready for school. It’s like even though it was exactly the same scenario as it was in real life, because we were “playing” suddenly it was a game. Suddenly, getting dressed was more interesting. Plus, I think the “pretend” created some distance between her and my anger, dissolving some of the stand-off between us.

Play helps with tasks too. Sometimes when the living room is an absolute wreck because all the toys have been drug out into it, I’ll ask the kids to clean up.

A lot of times, I’m initially met with resistance, but if I can find a way to turn it into a game they’ll play along. Back when Trolls was all the rage, the incentive was, “Oh no! The Bergens are coming and if you don’t get all your stuffed animals back in the play room they’ll get eaten! Hurry!” Sometimes a simple “I’m going to set a timer and you see how much of the laundry you can put up before it goes off,” works too.

Pushback against using play to get kids to listen

In your mind, you may be arguing against the use of playfulness. Children have to learn to obey because that’s what they’re supposed to do, you think. They should respect me.

Okay, maybe. But tell me this: When you have a boss or somebody in your family tell you what to do with a “because I said so” attitude, how keen are you on complying? Even if you do as you’re told, don’t you often feel an undercurrent of resentment?

Plus, sometimes when we say that children should “respect” us, what we really mean is fear us. Do we want the only reason for our children to comply with someone to be out of fear? We respect those who show respect to us. Get down on their level, play along, and you’ll get more respect in the long run. 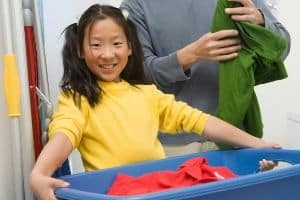 The other roadblock for using playfulness is parents being so used to being adults that they forget how to be playful. I get that. Honestly, I’m a pretty straight-laced person. I’m the sort who wouldn’t even dance freely when I’m by myself because I’m too embarrassed.

While it’s helpful to be able to let loose and be silly (my husband is better at this), it’s not necessary. Plus, it’s one of those things that you get better at with practice.

And you use playfulness to motivate yourself with tasks too! Lots of people play music while they clean, dance a bit as they sweep, or whatever it takes to keep them going during otherwise boring tasks. Why not do the same for your kids? After all, you’ll be modeling self-motivation tools for your kids while dancing!

How to turn on your playful side

So what are some practical steps towards using play to break tension and get them to do what you need them to do? After all, you’re probably already at your most irritable and least playful when you need these tools the most.

RELATED: How to stop yelling and become a calmer mom

1. Take a moment to calm yourself

Usually, I first have to stop my train of thought where I am to keep from going down a more negative path. This requires recognition of two facts: 1. I’m feeling pretty dang irritable, or annoyed, or stressed, or whatever it is at that moment, and 2. While it’s totally reasonable that I feel that way at the moment, it’s not helping me or my child.

RELATED: How mindfulness can make you a better parent

2. Come up with a silly scenario to present to your kids

Next, I have to come up with a silly scenario. I honestly don’t even have to be super “into” whatever I come up with, if I just present it and stick with it for a few minutes (like the witches’ brew thing), the kids will get involved and the idea will take on a life of its own.

I picked a witches’ brew most recently because it was right after Halloween, but use whatever works for you.

We’ve pretended to be Cinderella’s mice to fold and put away laundry (there’s a lot of laundry with three small children), I’ve pretended to be a monster chasing my toddler to get him to get out of our neighbor’s yard and back into ours, the list goes on.

The more often you use this technique to get your kids to do what you need them to do, the easier it’ll become for you.

Plus, if you’re usually irritable or yell a lot with them, this technique will likely improve your connection. Both you and your children will feel better. So over time, they’ll become more likely to do what you ask simply because you asked, without you needing to step up your reaction.

I hope this post gives you some great ideas for how to get better cooperation from your child through play. In addition, using play this way will help you stay in a better mood too.

If you want more support for your responsive parenting journey, get the Mindful Mamas and Connected Kids toolkit! You’ll get eight pages of strategies you can implement immediately, including Playful Prompts for Cooperative Kids, printable Mama Mantras (to place around the house!), and the six step Tantrum Tamer process. Join here to get your toolkit today!

142shares
Samantha Radford has a PhD in Chemistry from Emory University (Atlanta, GA). She is an exposure scientist who focuses on maternal-child health. Samantha has years of research into learning about how chemical exposures affect both unborn babies and children, as well as how toxicants and medications are passed through breastmilk. Samantha also studies the effect of exposure to hormones induced by personal experiences, for example, cortisol in babies who are stressed or oxytocin in mothers bonding to their infants. Through the years, Samantha has expanded her academic and personal studies to how exposures to different parenting styles affect the mental and physical health of children as they grow to adulthood.